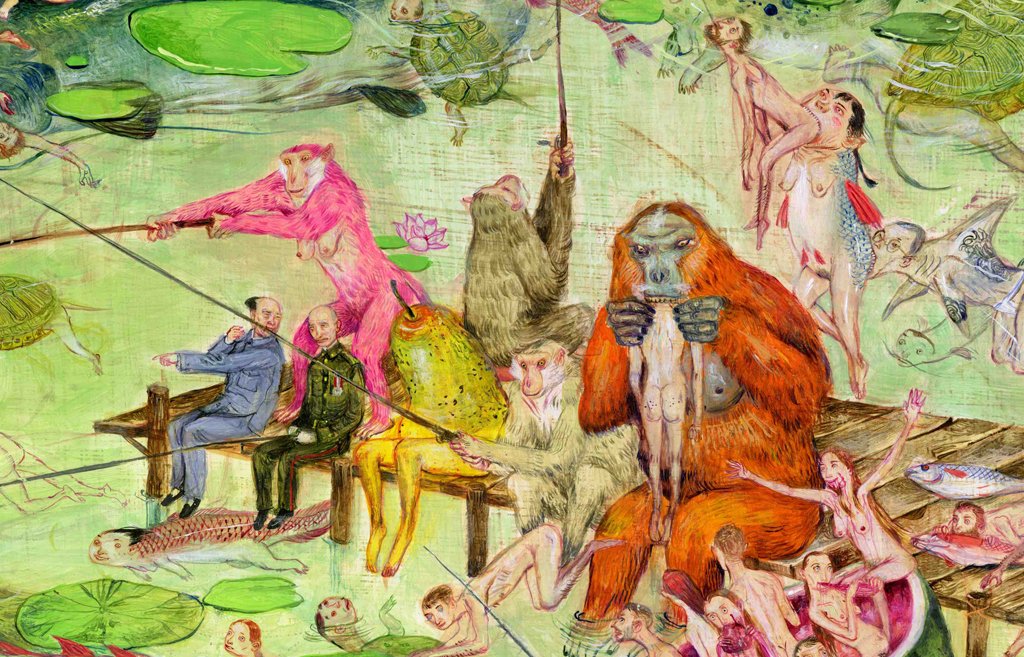 Espacio SOLO Madrid is currently hosting the most ambitious retrospective to date and first museum presentation by the artist, Mu Pan. The exhibition brings together over 20 works by this master of visual narrative, many of which have never been shown in Europe before, including his most recent work, Mu Pan’s Garden of Earthly Delights. Together with artwork by Mu Pan, the exhibition also showcases pieces by other contemporary artists such as Dustin Yellin, Dan Hernandez and Motohiro Hayakawa, as well as 19th century Japanese woodblock prints created by the ukiyo-e master, Utagawa Kuniyoshi.

“Mu Pan and Other Beasts” occupies three large rooms at Espacio SOLO, completely transformed to submerge the visitor in the artist’s universe, a unique place where every work transports us to unexpected territory, to worlds beyond reality. No wonder this artist is known as a “creator of worlds.” His paintings are genuine visual adventures, action-packed stories filled with exquisite detail, disparate blends of historical, literary, political and cultural references which illustrate the information overload characteristic of our times.

Through his art, Mu Pan invites us to reflect on the informative bombardment to which we are now exposed, a context where fake news merges with reality. He also questions concepts such as that of the “hero,” so widespread and yet intrinsically so ambiguous. His approach is critical and incisive but always with a hearty dose of humour and irony, clearly two of this artist’s trademarks.

Cultural mash-up, the story of today

Mu Pan (1976) was born in Taichung City, Taiwan, and emigrated to the USA in 1997. His artwork reflects a huge diversity of cultural influences, from classical Chinese literature to superheroes, ukiyo-e, cinema and comics.

To view one of Mu Pan’s painstakingly constructed battles is to step inside a world of action, dynamism and energy. His paintings possess a richness of detail reminiscent of Hieronymus Bosch, with apocalyptic connotations, hybrid, caricature-like creatures that are half-human and half-animal, along with epic scenes that blend current affairs and manga.

Mu Pan’s work is an outlet for everything that bothers or enrages the artist: his paintings express violence, conflict or falsehood, and are always underpinned by anger and humour. As he explains, “For me, drawing and painting are the most obvious ways to demand justice.”

Global warming, racism, class discrimination or trade wars between superpowers all serve as inspiration for this artist, whose subject matter is human nature and our present-day.

At “Mu Pan and Other Beasts,” visitors have the opportunity to view woodblock prints by Utagawa Kuniyoshi and Oju Toshimasa, which have never before been exhibited in Spain.

Kuniyoshi is recognised as one of the grand masters of ukiyo-e, the Japanese woodblock prints which became popular in Edo-period Japan (1603-1868). Famous for his battle scenes and warrior portraits, Kuniyoshi is of particular relevance for Mu Pan and many other contemporary artists. Despite the pass of time, ukiyo-e continues to impact significantly on our visual culture and directly influenced Western artists such as Monet and Van Gogh.

Other “beasts” on the contemporary art scene

As well as providing a historical framework for Mu Pan’s art within the context of ukiyo-e or Western influences such as Hieronymus Bosch, “Mu Pan and Other Beasts” provides viewers the opportunity to discover other relevant players on the contemporary art scene, an atmosphere characterised by cultural fusion and information overload. Highlights include artworks by Dustin Yellin, Dan Hernandez and Motohiro Hayakawa.

Like Mu Pan, Dan Hernandez and Motohiro Hayakawa are passionate about epic battles. Hernandez blends video-game aesthetics with Renaissance or Byzantine influences, while in Hayakawa’s work, monsters, aliens and intergalactic warriors take centre stage. Through his knitted creations, Mark Newport reflects on gender, identity and what it means to be a hero.  When it comes to detail, meanwhile, Dustin Yellin is a pioneer. His collage sculptures are meticulously built using countless paper cuttings encased within layers of glass. According to the artist, they are “an archive of our culture.”