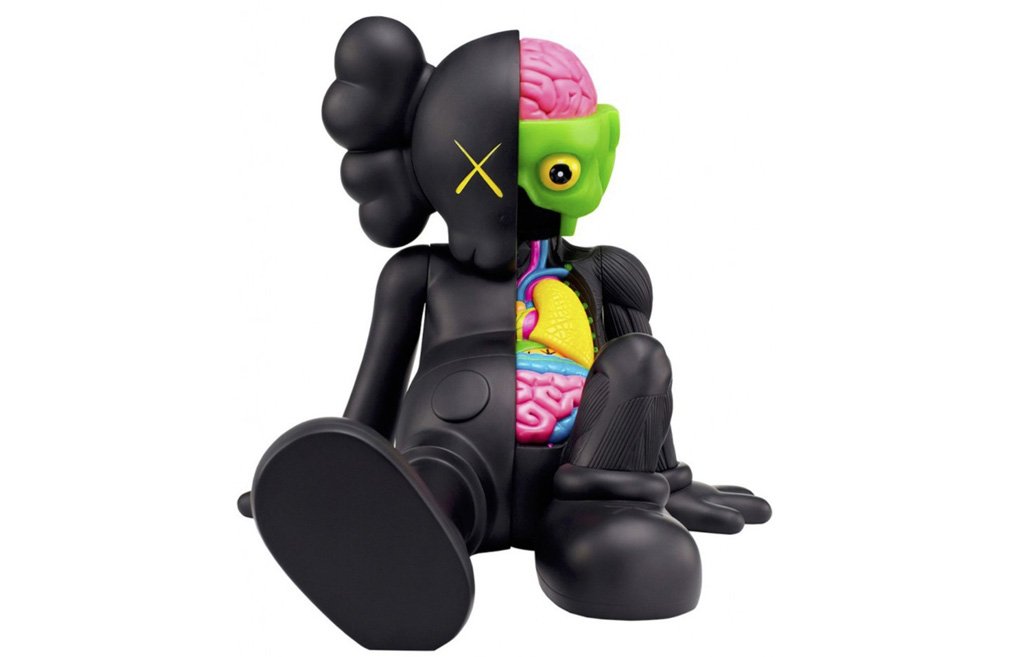 Think KAWS and Companion immediately comes to mind. The cartoon character with X-ed out eyes, blobby bone ears and Disneyesque gloves has come to be synonymous with the Brooklyn-based phenomenon, Brian Donnelly, aka KAWS. Since its first appearance back in 1999, Companion has taken on countless forms, from limited edition toys to large scale sculptures and even a giant sized balloon for the Macy’s Thanksgiving Day Parade in 2012. And now, Companion is on display at Espacio SOLO, Madrid.

The backstory to “Companion”

So where did it all start out? Well, as a “smart ass kid” according to Donnelly, who was “always into drawing” and found an outlet in graffiti. From the early 90s, he was tagging walls, freight wagons and billboards under the pseudonym KAWS. Following in the footsteps of legendary street artists such as Ron English, KAWS highjacked advertising imagery, seamlessly merging his creations with publicity for big name brands. Christy Turlington Ad Disruption (1997), for example, sees a hairy, Companion-headed serpent invading a black and white ad for Calvin Klein.

Companion first appeared in 3D format in 1999, a black and grey cast vinyl figure produced with the Japanese firm, Bounty Hunter. Despite its reduced proportions, Donnelly admits that this figurine marked a turning point in his work: “After making that first toy, it was eight inches tall, but in my head it was like I’d just made a building or a boat.” Companion was set to become a recurring feature of the artist’s production, a complex and often vulnerable character shaped by life’s experiences.

Empathy is key to Companion’s universal appeal. Put simply, we’re drawn to the character because, at some level, we know how he feels. This feature of the artist’s work is underlined by the curators of KAWS’ first UK retrospective, held at Yorkshire Sculpture Park in 2016. “Throughout its history, sculpture in public space has tended to celebrate the winners in life: kings, presidents and heroes on horseback, who are raised high above the rest of society on tall plinths. In contrast, KAWS’ open-air sculptures are in real-life, momentary, poses,” reads the exhibition guide.

Companion (Passing Through) sees the figure in a seated position, hunched slightly and covering its eyes. The monumental version, over four metres high, has been exhibited at Aldrich Contemporary Art Museum, Hong Kong Harbour and in front of New York’s Standard Hotel, among others. As Donnelly revealed to the Wall Street Journal, the posture was inspired by a basic feeling of shyness: “I was thinking, God, if I had to sit there all day and have a million people pass me and stare, I’d me mortified. That would be the worst experience ever. That’s where the pose came from.”

On display in Madrid, dissected by relaxed

In the sculpture on permanent display at Espacio SOLO, Companion is sliced in two, revealing neon coloured inner workings. Sitting over a metre high, Companion (Resting Place) screams out for attention, with its bright pink brains, lime green skull and garish collection of internal organs. For Donnelly, however, the composition is anything but gory: “I was just thinking about giving the figure a break. This toy’s sat on my shelf for some years and I pictured him relaxing.” So there you have it. Companion at Colección SOLO: colourfully dissected, wonderfully laid-back.