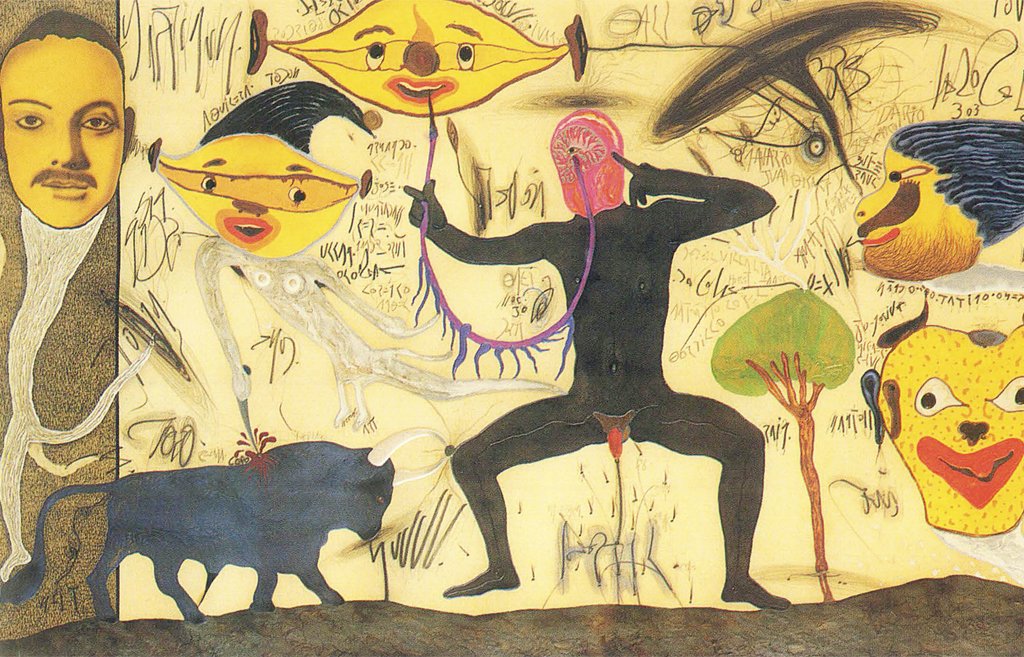 From Evrugo Mental State to Nobson Newtown, from Clown Squid to Whoriders and Lizardmen, parallel worlds and their intriguing inhabitants form an essential part of Colección SOLO.

“People see it as a virtual or imaginary space but to me it’s absolutely real,” says the landmark Spanish artist Zush / Evru of Evrugo Mental State, the alternative universe he created back in 1968. This unique space provided the setting for all his future work, a physical territory complete with its own alphabet (asura), passport, flag, embassies and currency (the Tucal). Most importantly, it is a means of communication, a mobile domain free of limitations where the artist enjoys complete liberty to explore and express his creativity. It is a world of opportunity, an invitation for every viewer to discover the artist inside them. As the artist explains, “Evrugo Mental State is an autocracy. Its philosophy is that each of us have a state in which everything is possible, a universal space.”

For British artist Paul Noble — Turner Prize nominee in 2012 — this “state” comes in the shape of Nobson, a dystopian imaginary city developed and depicted through drawings, sculptures and installations. Social critique laced with touches scatological humour, Nobson has been described by the art critic Ben Luke as “an epic vision of the ridiculousness and mysteries of human life […] one of British art’s true magnum opuses.” To its creator, however, the work also fulfils a more intimate function: “town planning as self-portraiture,” says Noble.

Colección SOLO newcomer Jinu Nam goes even further, viewing his parallel world as a therapeutic tool. His alter ego, The Clown Squid Gentleman, battles the injustice and absurdity of a cruel society in a fabulously constructed universe populated by monsters and giant squid. “I hope that through this process, my hurt childhood innocence could be healed and I could move forward anew,” says the Korean artist. Taiwanese-American talent David Jien takes a similar view: in his adventure-filled narratives, reminiscent of Chinese scroll paintings, all the characters are essentially versions of himself. “My drawings are my inner struggles manifested through a cast of characters. I am a Whorider. I am a Lizardman.”

Escapism, then, has little to do with it. Instead, parallel universes offer the freedom to reflect, explore and communicate. As the US cartoonist and author Lynda Barry puts it, “We don’t create a fantasy world to escape reality, we create it to be able to stay.”