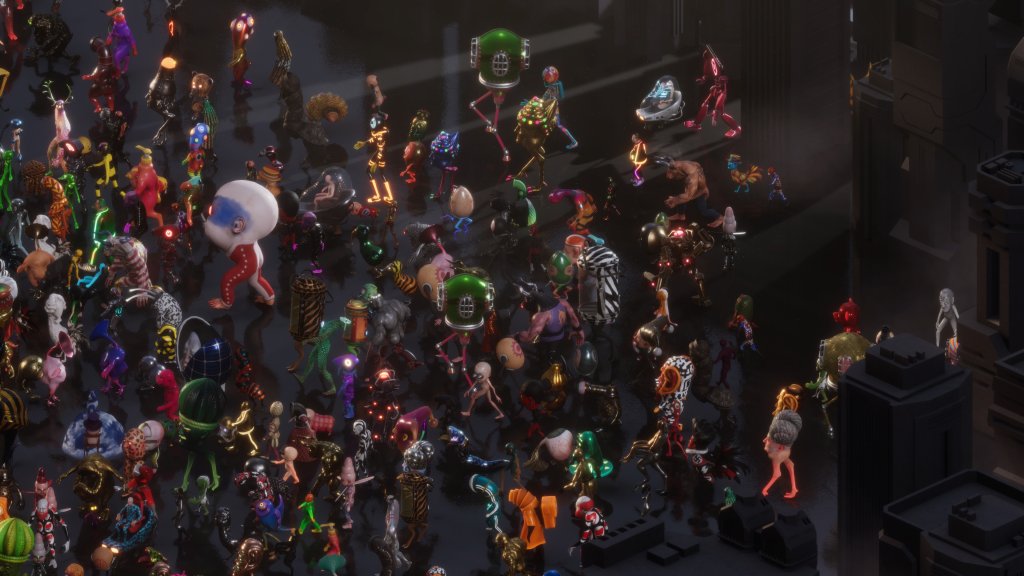 The Dutch collective SMACK uses videogame engines to confront us with our group behaviour and show the hegemony of collective truths in the face of our ability to doubt. Tribe War, a live generative work, reflects on culture wars and our inability to modify certainties shared by the group. Tribe, on display at the Espacio SOLO (Madrid), presents awide-ranging art project including digital pieces, generative work and sculpture. Tribe Tower, currently in progress, will be presented in September as part of the inaugural exhibition at the revamped Evoluon in Eindhoven (The Netherlands)

Mass behaviour, the hegemony of collective truths and our perception of ourselves are put under a kind of microscope in TRIBE, the latest project by the Dutch art collective SMACK, presented this week in Madrid in the Colección SOLO space.

Three digital works —Tribe City, Tribe War and Tribe Tower— form the backbone of a broad project that brings together around 300 characters and encompasses both digital media and physical formats, such as sculpture. The renowned trio of artists has presented its new project at the Colección SOLO (Madrid) while one of the pieces of the artistic proposal, Tribe Tower, will be presented exclusively at the reopening of the Evoluon museum in Eindhoven next September. 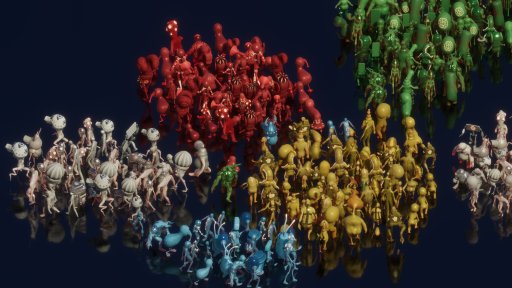 Hybrid beings -half camera, half gorilla-, PPE overalls turned into fashion items and baby heads with little legs fighting beasts, are some of the characters that exist in Tribe. Hundreds of beings and dreamlike and dystopian elements inhabit the digital and autonomous works that are part of this project. “It’s a portrait of the masses,” summarise the artists, whose fascination with group dynamics, technological phenomena and the ego are expressed in Tribe with an eclectic selection of individuals who bring to life deeply recognisable social attitudes.

Collective behaviour and manipulation are recurring themes in SMACK’s work, which often uses popular visual references and light-hearted aesthetics to present us with an uncomfortable reflection of who we are.

Videos like Kapitaal (2006), Transparency Suit (2010) and Branded Dreams (2015) addressed the omnipresence of commercial brands in our societies.Witch Doctor(2015),a piece made for the rock group De Staat, anticipated, for its part, the interest in group behaviours developed in greater depth inTribe. These questions were the focus of SMACK’s first solo exhibition, Dreaming of Mass Behavior (2017).

The work SPECULUM (2019), meanwhile, represents a contemporary interpretation of Bosch’s The Garden of Earthly Delights. The digital triptych places the viewer before a crude mirror of our time. The work presents an environment populated by lonely individuals obsessed with images, invasive technologies and icons of contemporary popular culture.The work has been exhibited in London, Seoul and Rotterdam, among other cities. It has also been visited by more than 90,000 people at Matadero Madrid in the exhibition at The Garden of Earthly Delights Through the Artworks of Colección SOLO.

TRIBE: The Power of the Group Before the Mirror

For Tribe, SMACK developed a population of approximately 300 digitally animated characters, ranging from walking periscopes and swastika-wearing bugs to multi-headed aristocrats and muscle-bound machos. Each allows for variations in texture and colour, enabling the artists to deploy customised versions in different scenarios including Tribe City and Tribe War, while individual portraits are brought together in collections such as Tribe: Golden Characters. 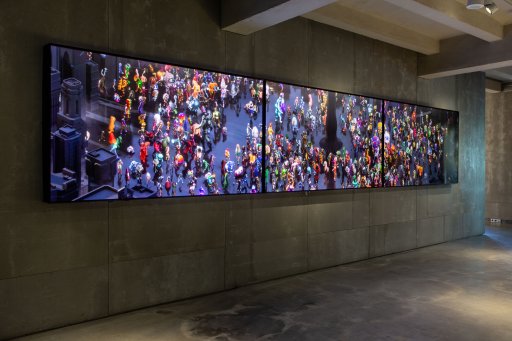 Many of these characters were developed during the COVID pandemic and reflect behavioural tropes associated with this time. “People were living in their own safety bubbles,” explains Ton Meijdam. “A lot have suits on because they’re afraid to interact with other people,” while others are walking hand sanitizers, robot cleaning products and super-hero medics.

Various characters are recurring favourites, already present in SPECULUM. These include an oversized head with robot legs and SMACK’s updated version of the Venus of Willendorf, created by blending images of the Palaeolithic fertility figure with footage ofKim Kardashian. What they all have in common, says Meijdam, is an inflated ego: “They carry this message saying, “Look at me! I’m very important.”

Tribe City is a 7 minutes 27 seconds video in which SMACK’s Tribe characters populate a grey landscape dominated by a central pillar. Developed as a generative work within a game engine, Tribe City is built of individually programmed characters, which react to each other according to established parameters.

Members of the crowd initially avoid each other, then opt to walk around and later worship the totem, before panicking and running away. 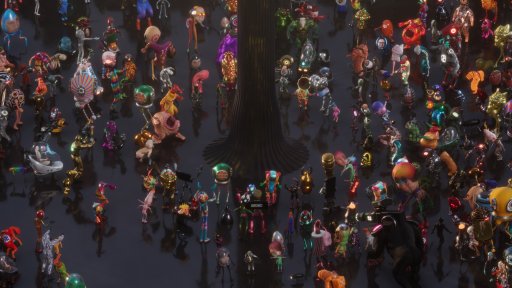 The pulsating centre point and robot guards raise questions about the characters’ autonomy, while sudden changes of pace seem to reflect the unexpected and often explosive nature of group behaviour. The crowd’s circular procession, meanwhile, is viewed by SMACK as a metaphor of herd culture and builds on previous iterations inWitch Doctor (2015) and the middle scene of SPECULUM (Paradise, 2016).

The second work in SMACK’s Tribe project is a live, generative piece that reflects on culture wars, the hegemony of shared truths and our inability to doubt our certainties and understand others.

In Tribe War, characters of different colours fight to occupy the central space on a plain blue screen, a clear animated illustration of the current culture wars the artists want us to think about. “Classical depictions tend to be wars between countries or based on religion,” says Meijdam, “but there’s this new kind of civil war emerging online in which people are immersed in their subcultures and everybody thinks their own little bubble-tribe is the only truth there is.” 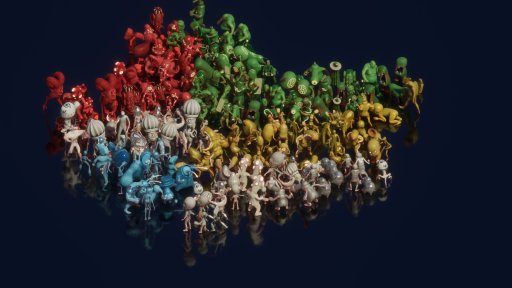 To reflect this, the characters in Tribe War are programmed to fight based solely on their colour, reacting automatically against their counterparts of a different shade. The absurdity of this conflict is underlined by the empty setting, cartoonish figures and bright tones, while the endless nature of the work reflects the permanence of violence. “I think the power of the piece is that it’s about universal human behaviour,” says Bela Zsigmond.“It’s an infinite war and we never learn from it. That’s a painful mirror for us as human beings”.

Tribe Tower: Happy to Be Incarcerated

Part Tower of Babel, part Panopticon, Tribe Tower is the third scenario in SMACK’s Tribe project and currently in progress. It will be presented in September as part of the inaugural exhibition at the revamped Evoluon in Eindhoven (The Netherlands). This work sees colourless characters inhabit a multi-storey structure reminiscent of an office block or mall, then engage in repetitive activities in an infinite loop.

The Tribe project, which will include more works over time, is made up of several digital series, sculptures and prints. Until December, the Colección SOLO will display the series Tribe Golden Characters and the sculpture King. Golden Characters includes seven characters shown against a smooth, somewhat Renaissance-inspired backdrop. The characters in the Golden series are part of Tribe NFT Characters, an axis of the project, presented in 2021, which brings together several dozen characters in a range of individual digital proposals.

With their brilliantly golden skin, the characters individually move toward an unknown horizon, highlighting the idea of the societies made up of hyper-connected loners that these artists usually explore. King, a bronze reproduction of one of the 300 characters inhabiting the Tribe universe, highlights the artists’ interest in moving their digital universe to the digital environment.