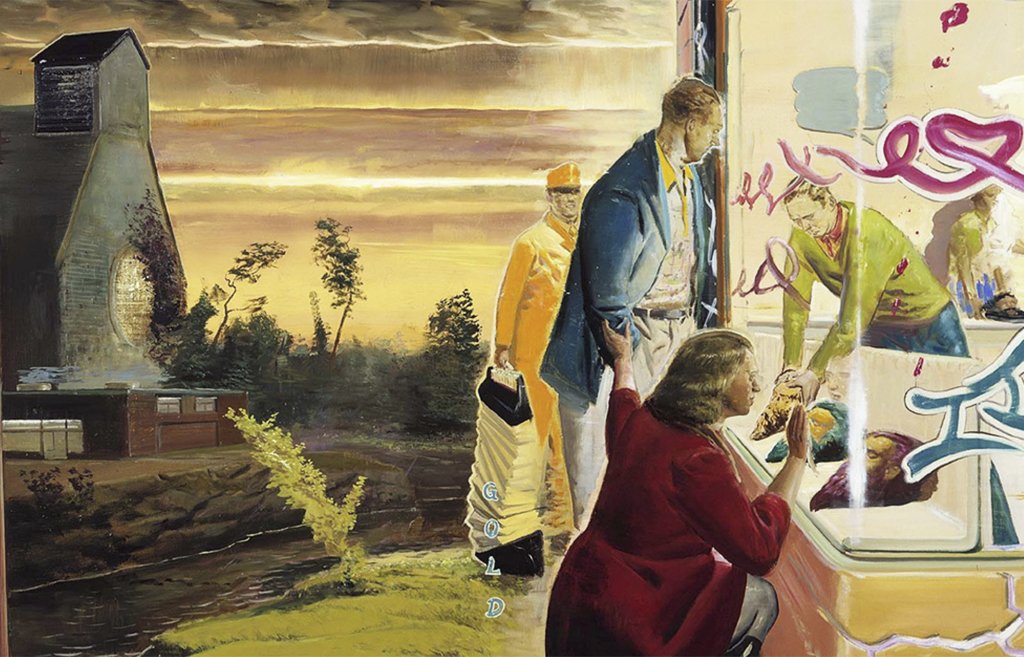 In 2002, The New York Times baptised him as “the painter who came in from the cold.” Eight years later, Vogue Italia made it even simpler: Neo Rauch is a “contemporary art master.” So whether you’re into Cold War spy glamour or not, this German painter is a chap to keep an eye on.

A leading figure in Europe’s art scene over the past twenty years, Rauch has achieved critical acclaim worldwide with an alluring blend of figurative imagery, surrealism and enticing suggested narrative. His dreamlike creations are held by landmark institutions including New York’s MoMA and Solomon R. Guggenheim Museum, the Stedelijk Museum in Amsterdam, and the Hamburger Bahnhof – Museum für Gegenwart, Berlin. Colección SOLO forms part of this prestigious list, with two excellent examples of Rauch’s work: Der Hirt (2000) and Gold (2003), which is exhibited at Espacio SOLO.

In characteristic Neo Rauch style, landscape morphs into nightmarish fantasy in the large-scale oil painting, Gold. Three figures observe what appear to be human heads displayed in a shop window, while staff inside prepare fresh stock. A sinister building to the left heightens the sense of unease and the thick bars of black cloud, lingering on the horizon, intensify the oppressive air of uncertainty.

Gold appeared in Rauch’s first museum survey in the USA — held at Saint Louis Art Museum in 2003 — and combines many of the features that have come to define the artist’s work. Rooted in actions and places, it recalls a history painting, yet with the dreamlike quality of surrealism. The muted colours lend a timeless quality, while the cast of expressionless characters seem to have arrived here from a vintage comic or propaganda poster. There’s writing too, with “Gold” spelt out vertically in the centre of the piece, and a host of inexplicable elements: the woman’s empty bag, open on the floor; the splashes of colour in the shop window; a speech bubble left empty. Gold, in short, is an invitation to endless pondering.

In this sense, it fits perfectly with the artist’s own evaluation of his work. As Rauch explained to the art critic and Chicago University professor, Christine Mehring, “My pictures are a suggestion. The outcome is not decided…” This idea is reflected in the way he works: Rauch paints directly onto canvass without a preconceived idea of the finished result. The artist has compared his creative process to a physical odyssey, likening the blank canvass to a bank of mist and himself to an adventurer forced to meditate on what kind of equipment he will need to manage the expedition successfully. Gold takes viewers on a similar journey, to a twilight zone where answers are lacking and questions only seem to multiply.

Help along the way might be provided by the character portrayed in Der Hirt. This piece, also part of Colección SOLO’s holdings, depicts a large shepherd dog with a human face and “Hirt” (meaning “shepherd”) written on its flanks. It is a recurring feature of Rauch’s oeuvre, appearing in paintings such as Felsen (2001) and Martznacht (2000), which forms part of the collection at the Art Gallery of New South Wales, Australia. A large-scale sculpture of this colourful, furry beast presided over Rauch’s 2001 show at Deutsche Bank – Guggenheim Foundation Berlin in 2001; the artist also developed the figure as a limited edition lamp for the same exhibition. Der Hirt serves as a guide, perhaps, in daunting times. And at Colección SOLO, an ideal companion and partner to the intensely mysterious Gold.