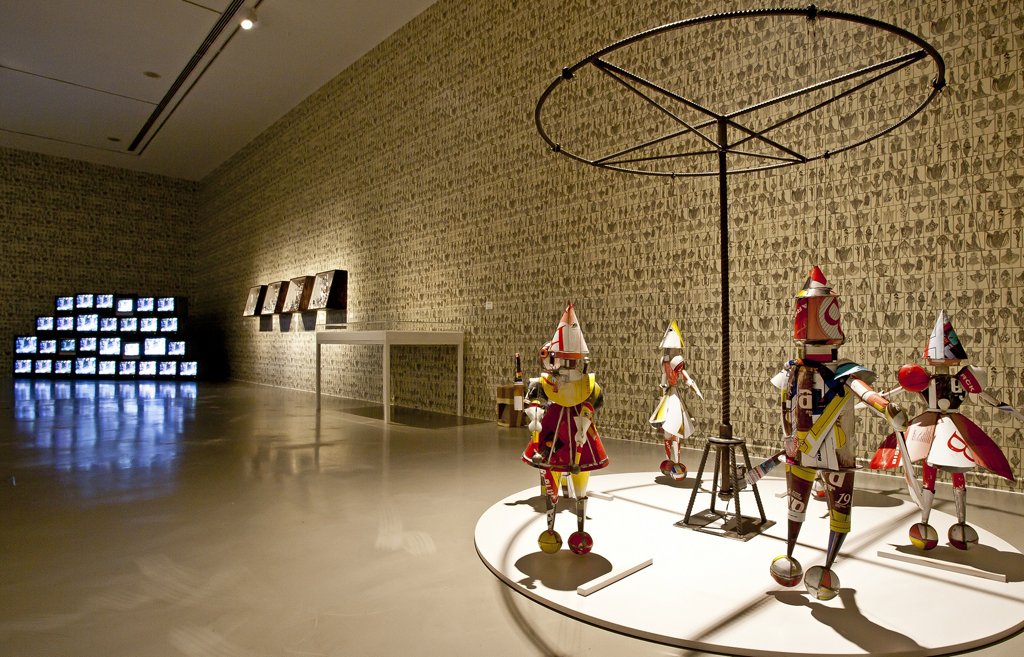 When it comes politics, Marcel Dzama is unequivocal: “I think it’s an important time for artists to make as much noise about it as we can,” he told Juxtapoz magazine earlier this year. Now, his personal brand of subversion arrives to Madrid in the shape of Drawing on a Revolution, a large-scale exhibition of drawings, sculptures and film, a genuine odyssey into the Canadian artist’s universe.

The muted colours of his ink and watercolour drawings may recall a bygone age, but there’s nothing outdated about Marcel Dzama. His concerns are rooted in the present, and his most recent drawings — many of which appear in this latest exhibition — go to prove it. The Love of All Things Golden (2017) references Donald Trump’s “golden shower” scandal, depicting the President himself, a female figure peeing and two vintage Donald Duck figures. The Revolution will be Female (2017), illustrates Dzama’s feminist ideals, while the wall mural created specifically for the exhibition in Madrid underlines the value of drawing or graffiti as a means of political expression.

Drawing on a Revolution also provides the opportunity to experience Dzama’s characters in action, both through his sculptural works and film. Merry go round #2 (2011), made up of aluminium puppets, recalls Oskar Schlemmer’s avant-garde Triadisches Ballett, created in 1922. And in Hall C, viewers can delight in Dzama’s 2013 film, A Jester’s Dance. This 35-minute absurdist drama traces one woman’s attempt to rescue her lover — the artist Marcel Duchamp — who is being held captive and tortured while made to recite chess moves. Originally commissioned by the Toronto International Film Festival, it is a masterful blend of historical referencing, nightmarish imagery and incisive political comment.

It’s a combination that few artists are so adept at delivering. For sure, Marcel Drama makes plenty of noise — he’s one of the contemporary art scene’s most prolific talents — but his rebellion is an exquisite affair. These are stunning visuals, painstaking historical references, vibrant comments on our everyday. In short, a rare and revolutionary treat.