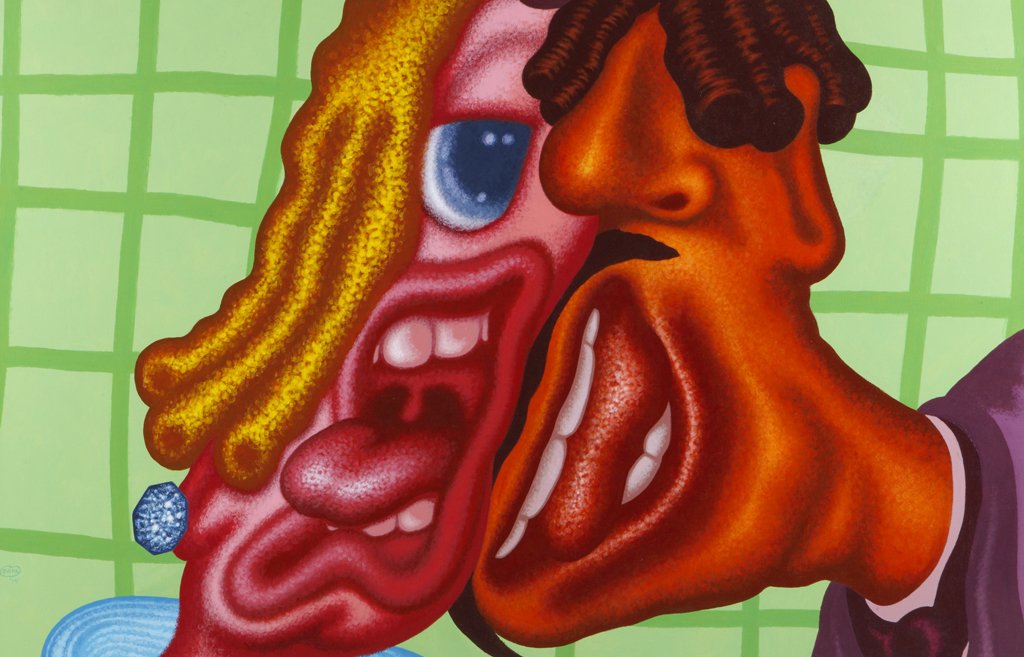 “Peter Saul demands our full attention,” says Philipp Demandt, Director of the Schirn Kunsthalle Frankfurt. Forerunner of the Pop Art movement, pioneer of Bad Painting and eternal outsider, Peter Saul has been poking critical fun at contemporary society since the 1950s, yet has remained relatively unknown to wider audiences. The Schirn’s current exhibition, Pop, Funk and Anti Heroes — the first large-scale retrospective of Peter Saul’s work in Europe — is set to put that right.

Born in San Francisco in 1934, Saul embarked on his career at an exciting time in American art history: the 1950s saw a young generation of artists break with the norms of Abstract Expressionism and seek out new means of expression. Blending rubbery textures, bold colour and cartoonish imagery, Saul developed a highly individual style described by the Schirn exhibition curator Martina Weinhart as “a powerful rampage against the rules of what a modern work of art ought to be.”

The Ice Box paintings from the late 50s and early 60s are landmark works. Saul’s juicy depictions play on the post-World War II mindset in which refrigerators were seen as a symbol of prosperity and economic growth; he presents a chaotic excess of consumer goods and provides the setting for mischievously searing narratives on mass culture.

From the 60s, Saul incorporated comic strip heroes such as Superman or Mickey Mouse into works that became increasingly political in nature. In 1967 he participated in the legendary Funk exhibition at the University Art Museum Berkley, and was one of the first artists to openly address the Vietnam war. His relentless criticism of the US political arena is evident in works such as Ronald Reagan in Grenada (1983) and Bush at Abu Ghraib (2006).

Comic book visuals laced with sarcastic humour and witty texts have been trademarks throughout Saul’s career. Trying to Kiss My Ass You Must Die (2001), held by Colección SOLO, is an amusing example, while Future Woman (2014) and Duet (2014) illustrate that Saul’s spongy, colourful textures are still relevant well into the 21st century.

Peter Saul’s influence extends beyond his own work, however. Often described as “an artists’ artist” he has impacted a whole generation of new talents. Erik Parker, for example, studied at the University of Austin when Saul was a teacher there and recalls being captivated by his approach to painting and life. As Parker explained in a recent interview with Schirn Mag, “For me, the fact that our paths crossed was a huge stroke of good fortune.” He concludes, “I learned from him that you have to follow your own vision of art and not some norm or other.”

Saul himself is currently busy working out how to depict Donald Trump. Worried that, “my actual political ideas are too commonplace and leftist to be of much interest,” the artist has nevertheless started sketching, revealing so far that, “I want a lot of things to happen to him so he’s gotta have three heads.” For sure, Peter Saul will heed the same advice he’s been successfully handing out to himself all these years: “I let the picture do what is best for it.”
Pop, Funk and Anti Heroes
Schrin Kunsthalle Frankfurt
Until 3 September