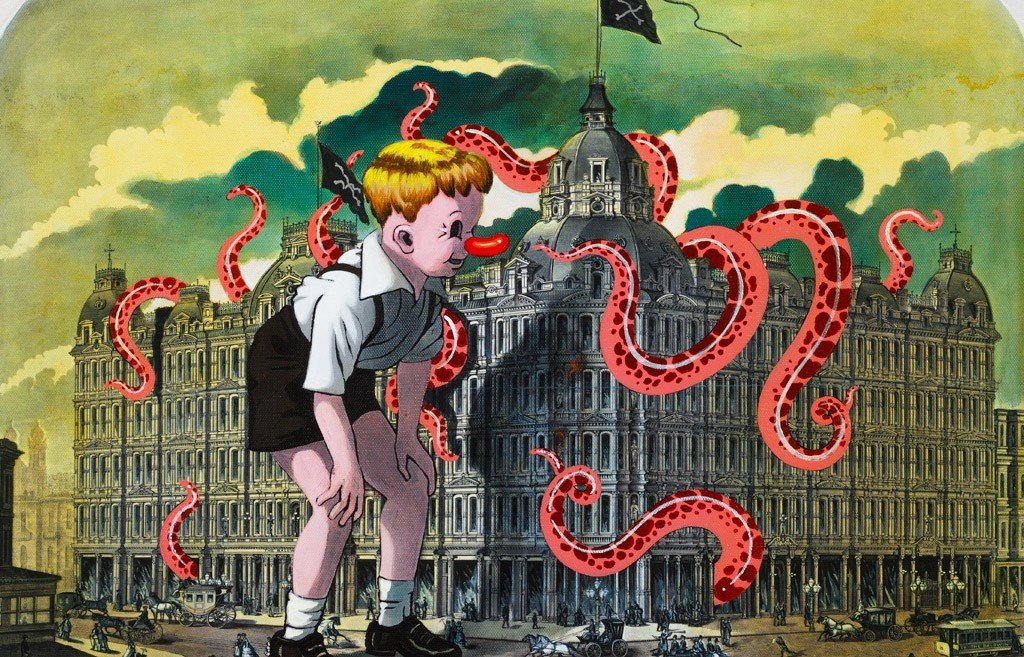 A recent addition to Colección SOLO, Hollywood Dreams VIII by the Chilean artist, Victor Castillo, forms part of a series first presented in Chile and Hong Kong in spring 2016. Using antique prints on canvas as a starting point, Castillo has re-worked period landscapes and street scenes, populating them with his trademark characters and infusing them with his unique blend of wit and malevolence.

According to he artist, the series deals “most of all with the apocalyptic kind of themes that are in fashion nowadays.” The pieces also draw on Gulliver’s Travels, with giant-sized children taking pleasure in destruction or featuring in scenes where, as Castillo explains, “emblematic buildings are presented as perturbing symbols of power.”

Hollywood Dreams VIII is based on an 1880 print by T.J. Petit and Co. of San Francisco, showing the Baldwin Hotel and Theatre. Built in 1877, the theatre was destroyed by fire in 1898, which inevitably lends the print a nostalgic air; it is a portrayal of short-lived fame, truly apt for Castillo’s mischievous take on the American Dream. Castillo’s version features a young boy — with the hollow eyes, sausage nose and antiquated outfits that characterise his work — apparently delighted by the presence of a bright pink, tentacled monster inside the grandiose building. A menacing green sky does the rest.

LA-based Castillo is a significant figure within the Lowbrow movement. His paintings, Puppy Toy and Homo Hominis Lupus joined Colección SOLO in 2014, and his artwork has been exhibited worldwide, including at prestigious museum venues such as the Museum of Contemporary Art in Rome and the Chilean National Museum of Fine Arts. His next solo show will be held in New York in 2017.