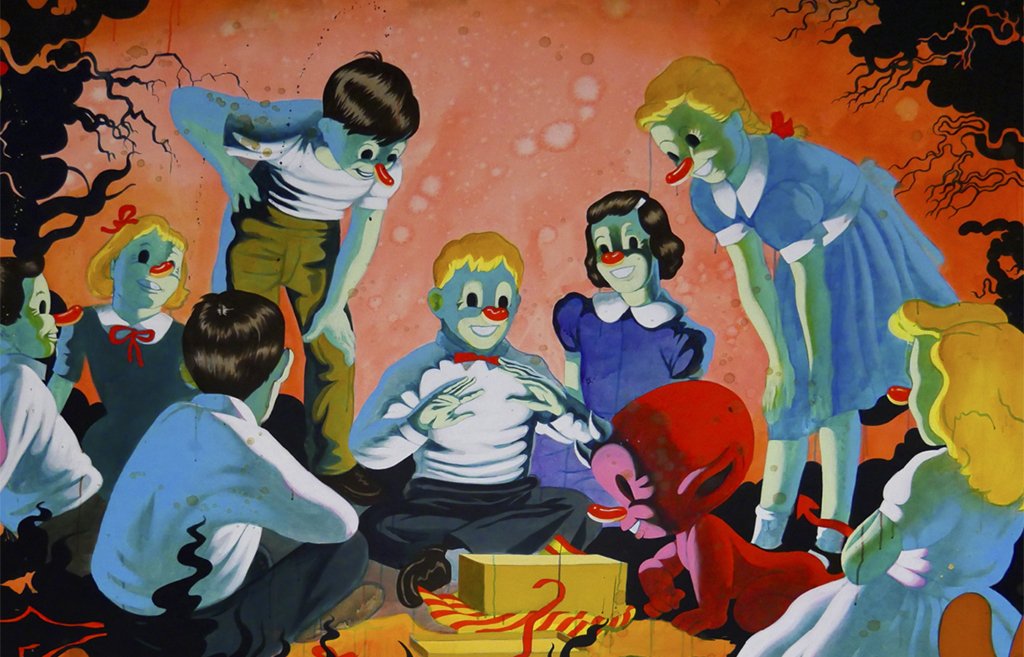 Mighty Mouse has lost the will to fight. He kneels on the ground, distraught, his face in his hands, while two smiling children look on, apparently delighting in the superhero’s distress. This is Broken Hearts by Victor Castillo, the title work for his latest exhibition in Los Angeles and an exquisite new example of the Chilean artist’s unique style.

In Castillo’s paintings, a cast of hollow-eyed children convey tales of greed, brutality or sheer indifference. Vintage cartoon aesthetics, bold colour and masterful lighting heighten the effect of these modern day allegories of human nature, skilfully obliging viewers to confront the darker side of reality. This is straightforward visual language, and all the more effective for it.

Castillo grew up in Chile during Pinochet’s dictatorship — explored in his 2016 exhibition, Born in ’73 — and worked with the Caja Negra collective before moving to Barcelona in 2004, then settling in LA from 2010. Political commentary is a mainstay of the artist’s work, as illustrated by the Colección SOLO piece Homo Homini Lupus. The painting draws on the Latin proverb Homo homini lupus est — “man is wolf to man” — and presents a dog-like beast in an Uncle Sam hat, set against a pink, apocalyptic landscape.

Love and disappointment are the central themes to the artist’s most recent offerings, presented this week by KP Projects, LA. Acrylics on canvas, colourful inks and graphite drawings, all infused with Castillo’s satirical wit. And that heartbreaking scene of a broken Mighty Mouse. Evidence that this reluctant pop surrealist is at the top of his game.