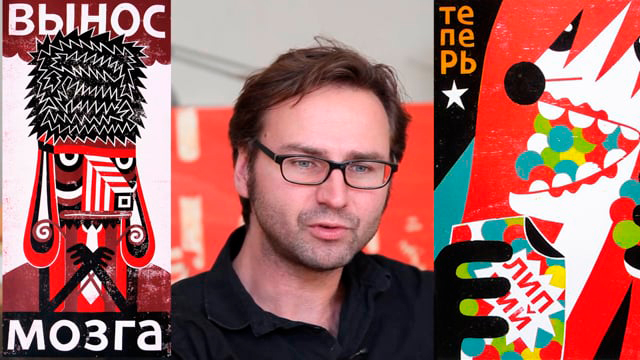 A modern-day master of woodcut printing, Roman Klonek creates bold images which take in the aesthetics of vintage comics, avant-garde propaganda posters and Eastern European folklore. His colourful narratives blend ancient craft with a pop culture vibe, and are populated by a hotchpotch cast of hybrid creatures, humans and animals.

Klonek was born in Kattowitz, Poland, and later moved to Germany with his family. As a boy, he was fascinated by his father’s collection of Polish and Russian Super 8 cartoons, as well as animated series such as Nu, Pogady! or Oswald the Rabbit, all of which feed into his work. Klonek studied Graphic Design in Dusseldorf and, as a professional illustrator, has created TV commercials, book and magazine art and the 2019 tour poster for US band, The Pixies.

“I’m interested in dealing with strangeness in itself,” says Klonek, whose oddball characters are often set in awkward or unexpected surroundings. Words and phrases in Cyrillic script or kanji are a regular feature, while clear shape and strong blocks of colour add dynamism.

Klonek uses a technique he refers to as “lost cut,” re-carving the same plate for each colour. By the end of this process, the wooden plate cannot be reused. The artist limits his palette to between three and five colours, working with oils for an intense, striking finish. In a digital age, he embraces the unique imperfections in each of these hand-crafted prints, explaining, “in the old days they did woodcut printing in spite of the mistakes and today you do it because of the mistakes.”

Klonek has exhibited across Germany, and in Los Angeles, London, Paris and Sao Paulo, among others. He has hosted solo shows in Berlin and Hong Kong, and participated in a group presentation at the Museum of Contemporary Art in Yinchuan, China. His first anthology, Woodcut Vibes, is due out in 2021. 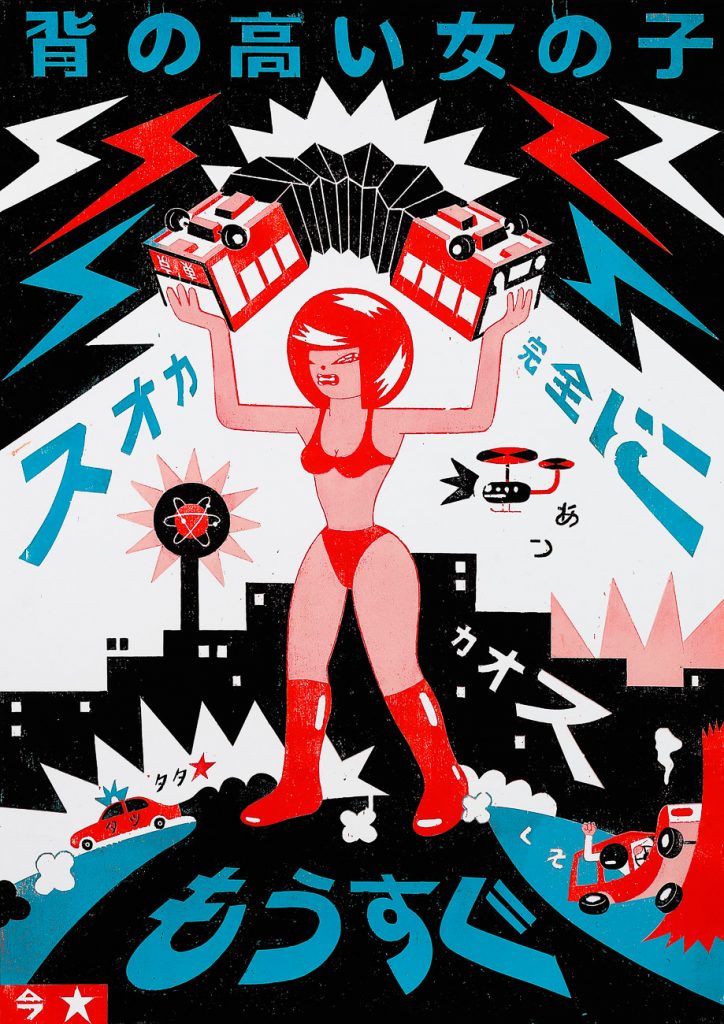 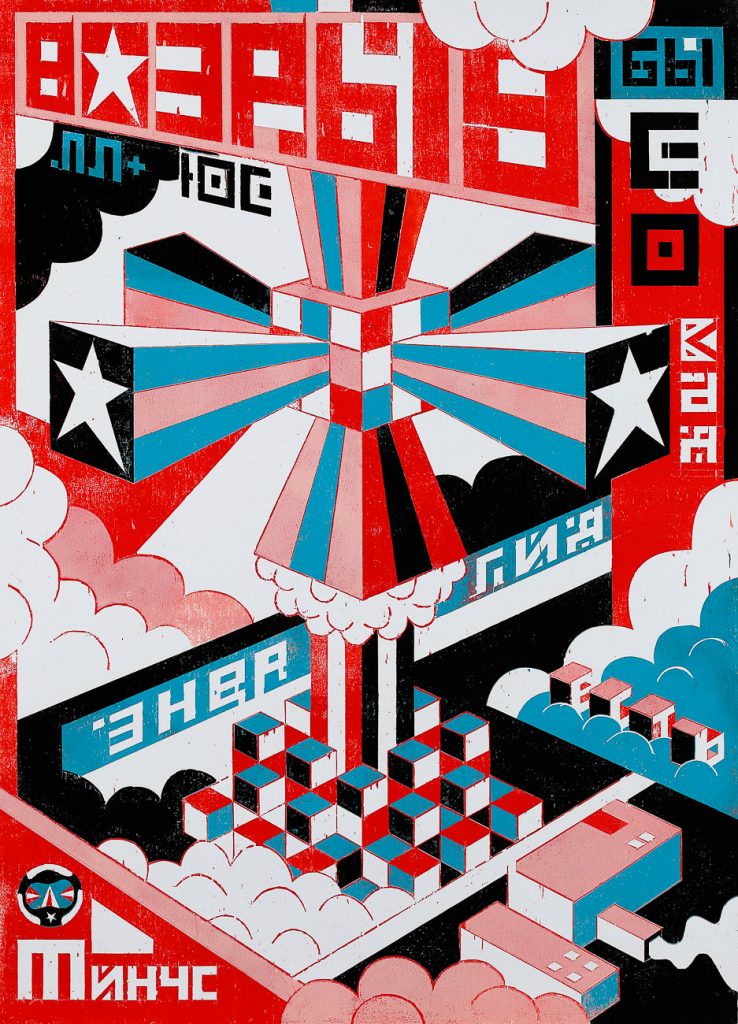 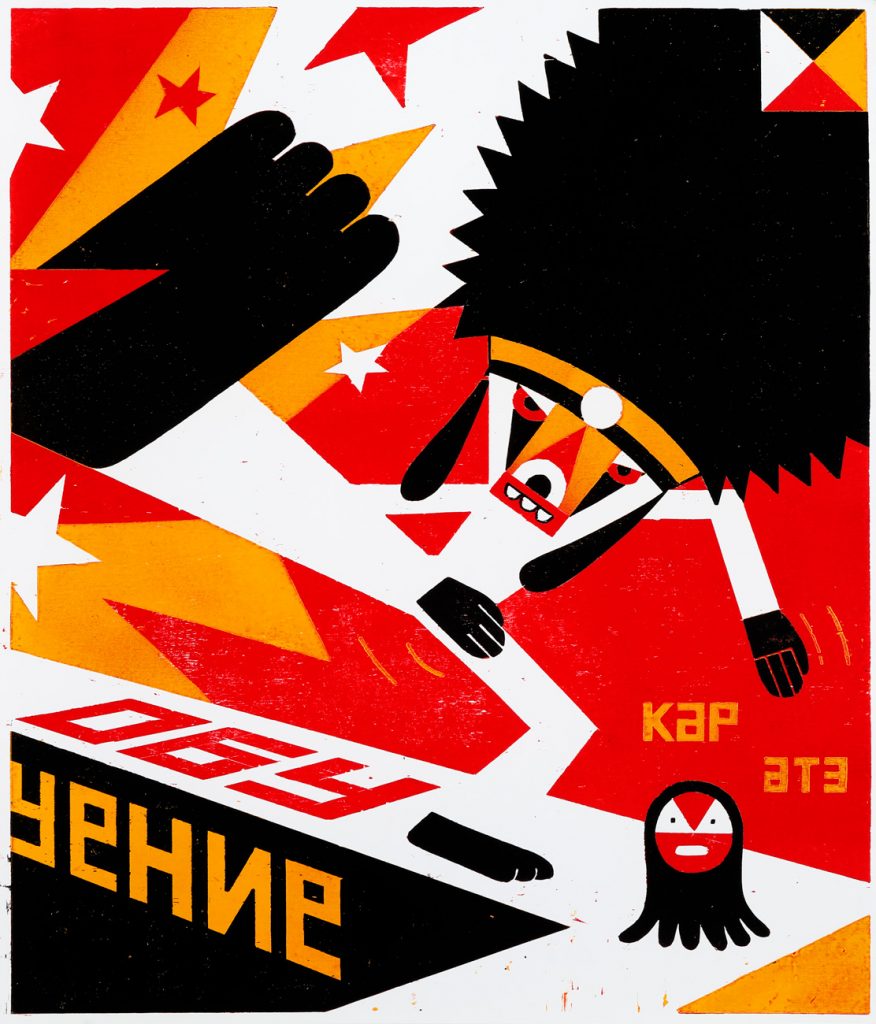 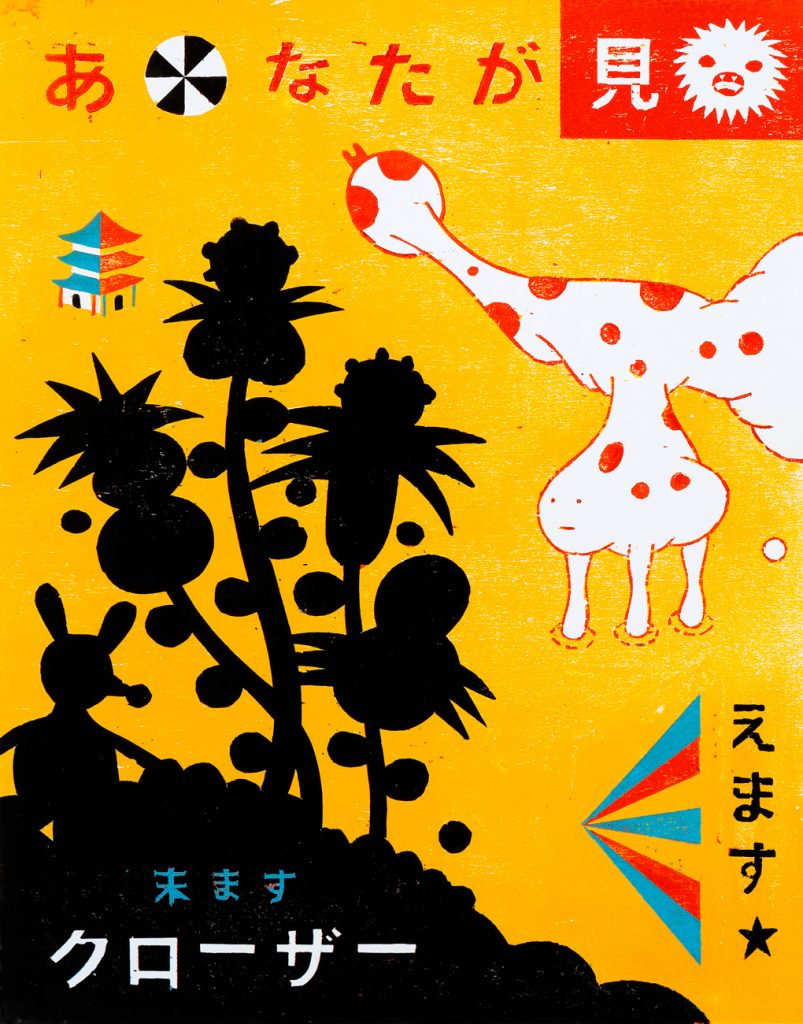 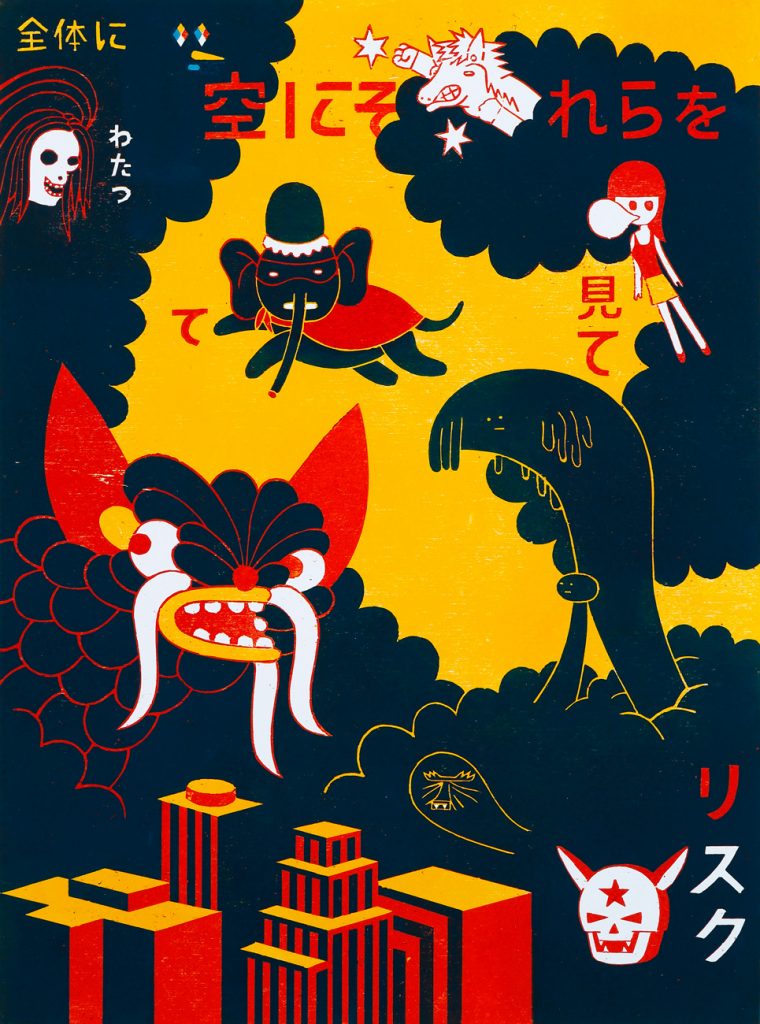 Year of the Tiger 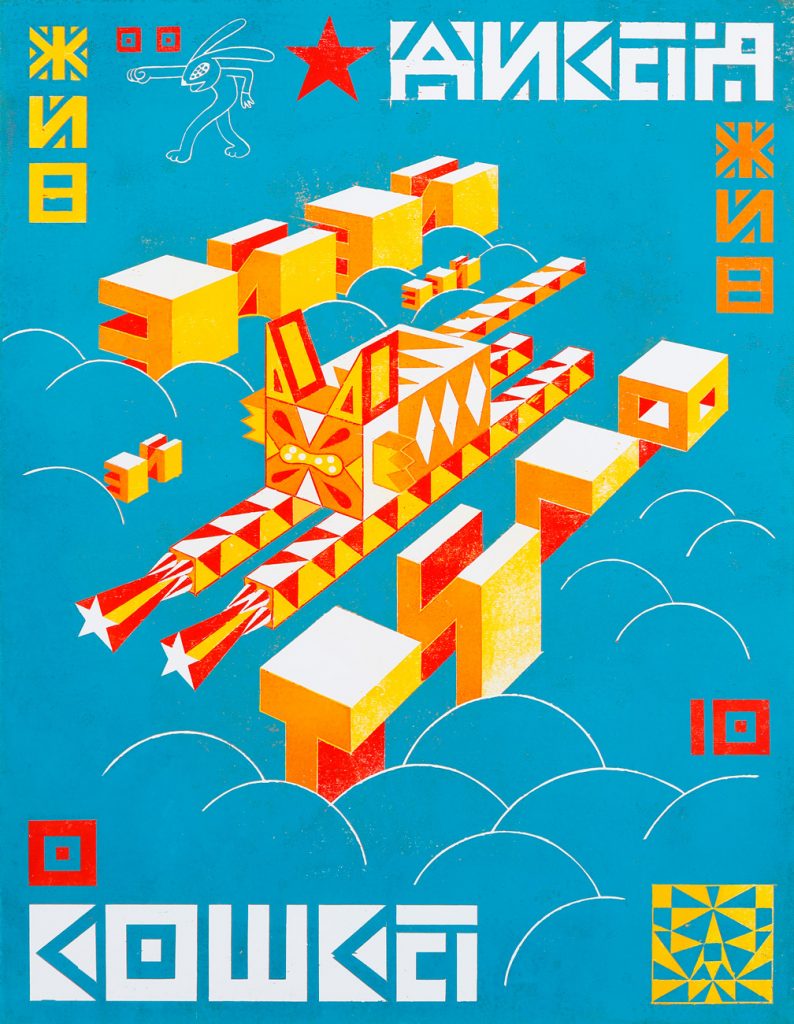 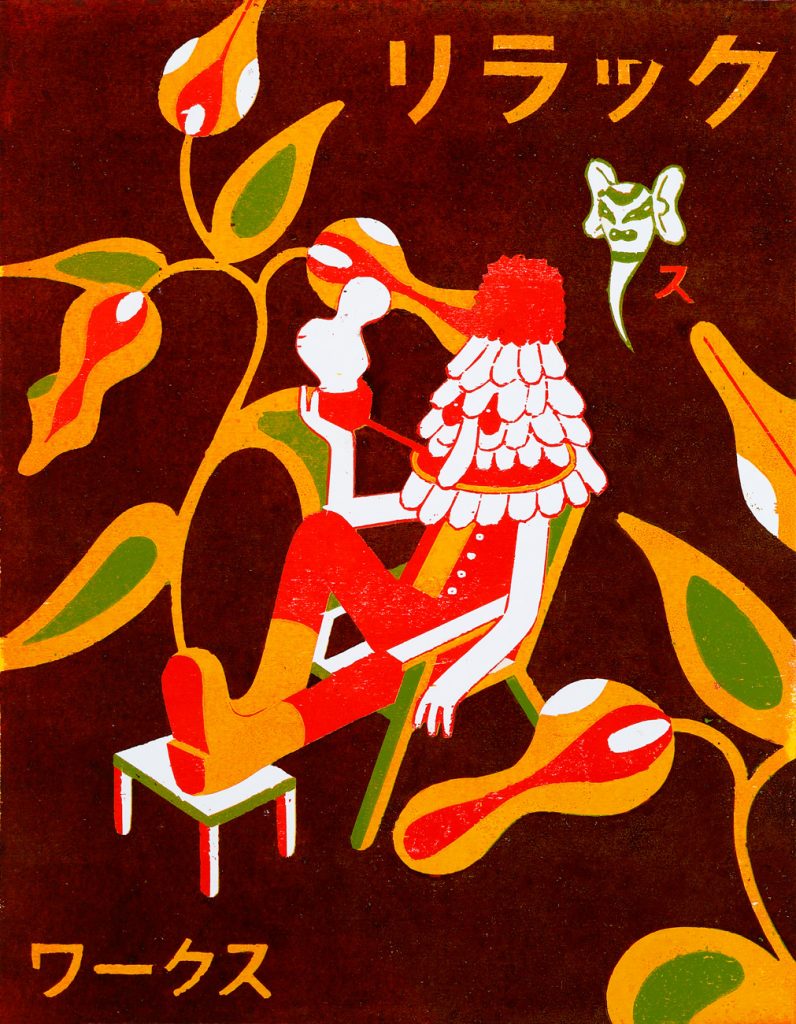 Crooks along the shore 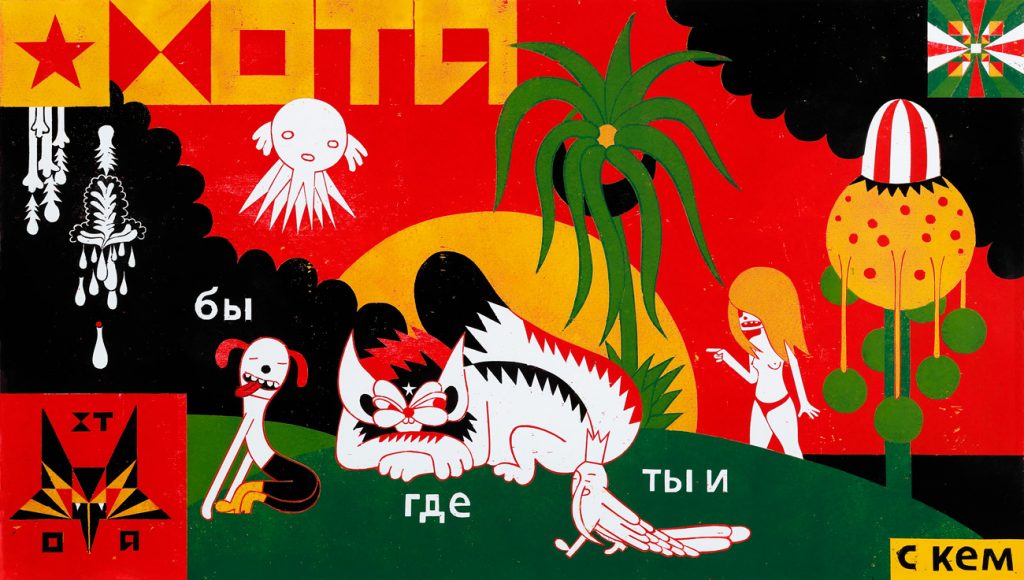