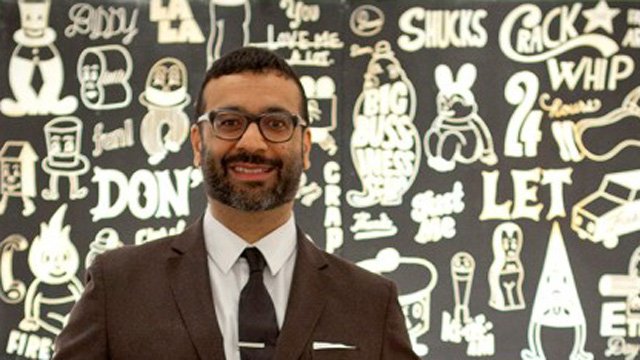 Canada’s foremost pop artist, Gary Taxali masterfully breaks down the distinctions between fine art, design, and pop culture. His distinctive visual language recalls a bygone age: faux-naïve cartoon characters, vintage-inspired typography and a textured feel all create a sense of familiarity, while he tackles contemporary issues with a mixture of jokiness and incisive criticism.

Born in India, Taxali grew up in Toronto, Canada, and studied at Ontario College of Art and Design. He moved to New York after graduating, and cites the East Village art scene as a huge impact on his early professional career. Other major influences were Andy Warhol, Ray Johnson, The Fleischer Brothers, or the Russian Avant-Garde.

Soon a regular contributor to publications such as The New Yorker, New York Times, or Rolling Stone, Taxali developed a stellar career in illustration. A founding member of The Illustrators’ Partnership of America, he has won numerous industry prizes, including gold medals from the Society of Illustrators and National Magazine Awards. He has been shortlisted for a Cannes Lion and received a Grammy nomination in 2009.

Taxali has exhibited extensively in the USA, Canada and Europe; he has created art toys, collaborated with the fashion brand, Harry Rosen, and designed a special edition of coins for the Royal Canadian Mint. Here and Now: The Art of Gary Taxali, the first large-scale museum retrospective of the artist’s work, was held at Design at Riverside, Cambridge, Ontario, in 2015.