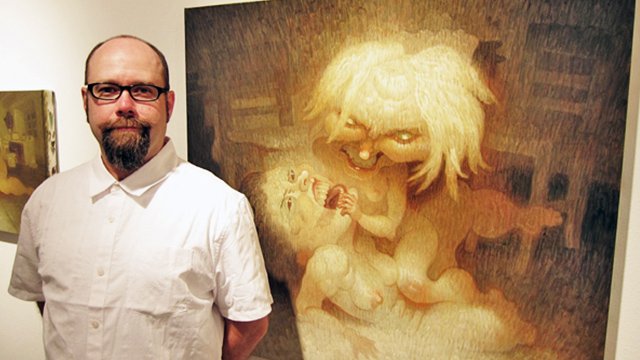 Underground comics, fine art and animation. Kids shows, playful adult cartoons or large scale oil paintings. Dave Cooper’s career is all about variety, images populated by immense casts of awkwardly racy beings across a range of different media. The common denominator, as the artist explains, is “an element of extreme contrast, whether it’s cute and horrifying, innocent and lurid, grungy and delicate, light and dark.”

A self-taught artist born in Novia Scotia, Canada, Dave Cooper was already a published cartoonist by his late teens, with science fiction works released by Aircel Comics. During the 1990s he continued to work as an illustrator and graphic novelist, creating underground comics for Fantagraphic Books in Seattle and attracting the attention of figures such as Robert Crumb or David Cronenberg.

Meanwhile, Cooper has also created children’s shows for Nickelodeon and Teletoon/BBC, collaborated with Matt Groening on Futurama and received numerous industry prizes including a Harvey Award and two Ignatz Awards. Pillowy: The Art of Dave Cooper (Cernunnos, 2019) is the first comprehensive monograph of the artist, who has exhibited work across the USA and Canada. A large-scale solo show of his artwork will be held in Paris in 2020.