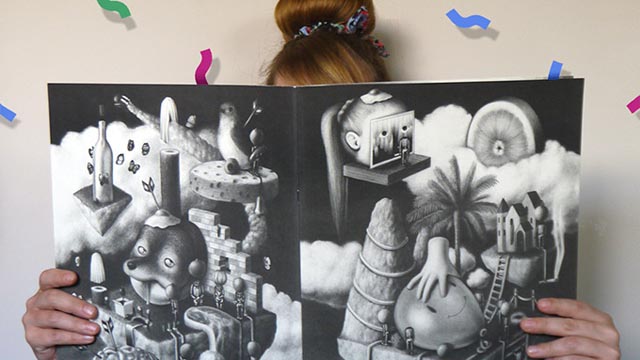 Sausages, mummies and bed-sheet ghosts live alongside dog-faced humans and children’s toys in Amandine Urruty’s beautifully drawn universes. Graphite lends a timeless, nostalgic feel, while the oddball creatures inside regard us with wicked ambivalence.

A self-confessed “weirdo” at school, Amandine Urruty always knew that she wanted to draw. In 2005 she completed a Master in Philosophy of Art at Toulouse University, followed by a brief spell as the lead vocalist in an underground band. Her illustrations soon drew interest from the art world and she was offered her first solo show in 2008. Since then, her drawings have been exhibited in Europe, the USA, Mexico and Asia, she has created large-scale wall murals in Thailand, Finland, Georgia and Spain, and published two books: Dommage Fromage (United Dead Artists, 2014) and Robinet D’Amour (Les Requins Marteaux, 2011).

Urruty’s busy worlds draw on her fascination with the Renaissance, Neoclassical and Romantic periods, her varied musical tastes and her passion for pencil and paper. Keen to keep her approach spontaneous and fun, Urruty works from her bed, building her images “like we would wander in the alleys of a Sunday flea market.” Visual bric-a-brac expertly transformed into delightful imagined realms.