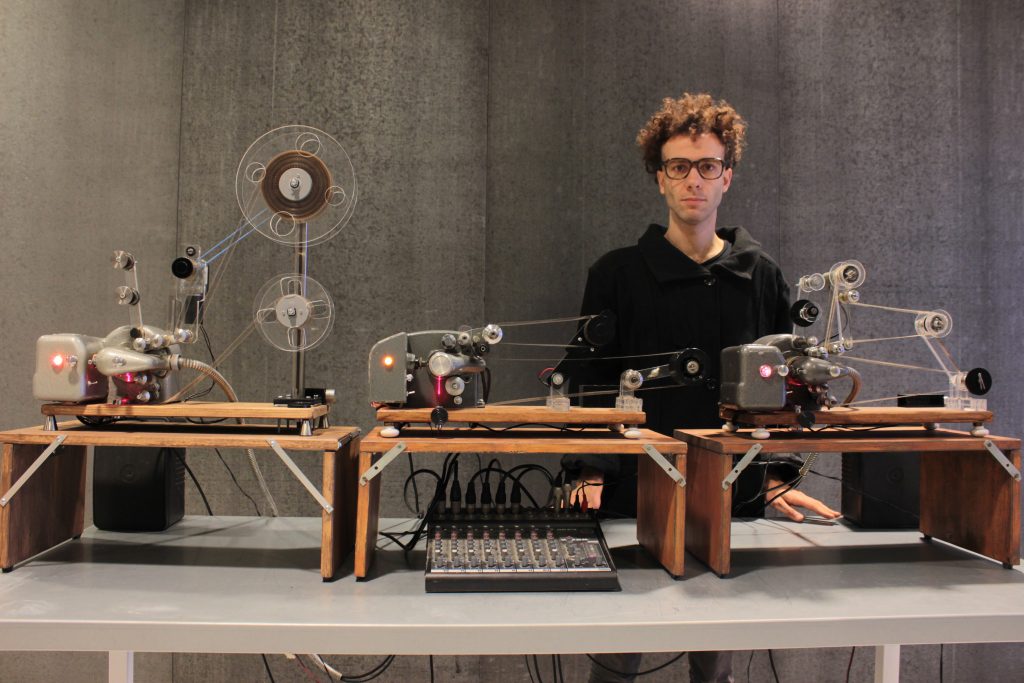 An artwork in which optical readers transform celluloid into musical compositions has won the €10,000 first prize in the PowSOLO Awards, created by Colección SOLO together with the Dutch collective, Powland Network. The winning piece, selected from 116 entries to the international open call, is by the artist Enrique de Castillo. His piece, entitled Phonoptics Readers, creates a constant stream of musical compositions by reading patterns designed on cinematographic film.

With the composer Ryuichi Sakamoto as a member of the jury, the PowSOLO Awards also conferred three runner up prizes in the categories Discovery of the Year, Invention of the Year and Viral of the Year, each receiving €1,000 in prize money, as well as a Special Mention.

In total, 116 sound art pieces from around 10 countries were presented to these awards, created by Colección SOLO and Powland Network, an Amsterdam-based collective dedicated to promoting sound art. The prizes aim to acknowledge the best international works in this artistic field, supporting creation, promotion and research in sound art.

The €10,000 top prize, Best Sound Art, has been awarded to a piece created in 2020 by the Spanish artist, Enrique del Castillo. It is made up of two hand-made optical readers which run simultaneously to play two rolls of 35 mm film, which, in turn, are printed with a variety of geometrical patterns. These readers translate light into sound, producing an ever-changing stream of compositions. “The pieces are unique compositions with an abstract sound rich in texture,” explains the prize-winning artist.

Enrique del Castillo is an artist and musician who studied Fine Arts at the University of Granada, Spain. He has exhibited at a range of galleries, sound art and experimental musical festivals, including CCCB Barcelona (Spain), Loophole Berlin (Germany) and the LPM festival in Rome (Italy).

Discovery of the Year: Menagerie

As well as the first prize, the jury has awarded three runner-up prizes in different categories, each receiving €1,000. The Discovery of the Year award, for the best work discovered in the past year by the sound art platform powland.tv, has been awarded to Menagerie, by the Stanford-based artist, Nolan Lem.

This installation comprises a giant swarm of automatic gun triggers. The repetitive noise of the triggers going off creates a unique soundscape, inviting reflection on the continued incidence of gun violence. Its creator, Nolan Lem, is an artist and researcher who has participated in exhibitions at venues such as Modern Art Buenos Aires (MAMBA), Pioneer Works (New York), L’HOSTE Art Contemporain (Arles, France) and the Danish National Museum of Music (Copenhagen). He is currently studying at the Center for Computer Research in Music and Acoustics at Stanford University, USA.

In the Invention of the Year category, the jury selected Fluid Memory. Fluidic Computer, a sound installation by the Berlin-based Romanian artist, Ioana Vreme Moser. This piece is a computer developed with glass, water and salt, capable of retaining 1 bit of information in each cycle and producing different sound patterns. Aside from its sound art appeal, this piece serves as an investigative model for sustainable computing solutions using water.

Ioana Vreme Moser is a transmedia artist, member of the T10 arts collective based in Berlin, and has developed her work in venues such as the Electroacoustic Music Studio in Krakow, in the experimental group Kinema, and with the Simultan Media Art Association in Timisoara.

The third runner-up prize at the PowSOLO Awards is for the most viral work shown on powland.tv. Bing Bang 850 is the most-viewed work by followers on the collective’s Instagram account, a kinetic sculpture by the Swiss artist, Étienne Krähenbüh, made up of numerous metal tubes linked to form a sphere. Like a giant chime, the piece generates sound as they collide.

Étienne Krähenbüh has a long track record as an award-winning artist, having won the Eurasia Sculpture Biennale in 2017 and O/2000 Fountain in 2020, among others. Over his extended career, Krähenbüh has exhibited in museums and galleries across the globe, including Seizan Gallery in Tokyo and New York, Joan Gaspar Barcelona and Rosa Turesky in Geneva.

The PowSOLO Awards jury, made up of Ryuichi Sakamoto, senior staff at Colección SOLO and the founder of Powland Network, Mark Berman, have also decided to award a special mention to the sound installation, Auspicio. Created by the Italian artists Enrico Ascoli and Hilaro Asola, the piece produces a soundscape of birdsong using the gases released during wine fermentation.