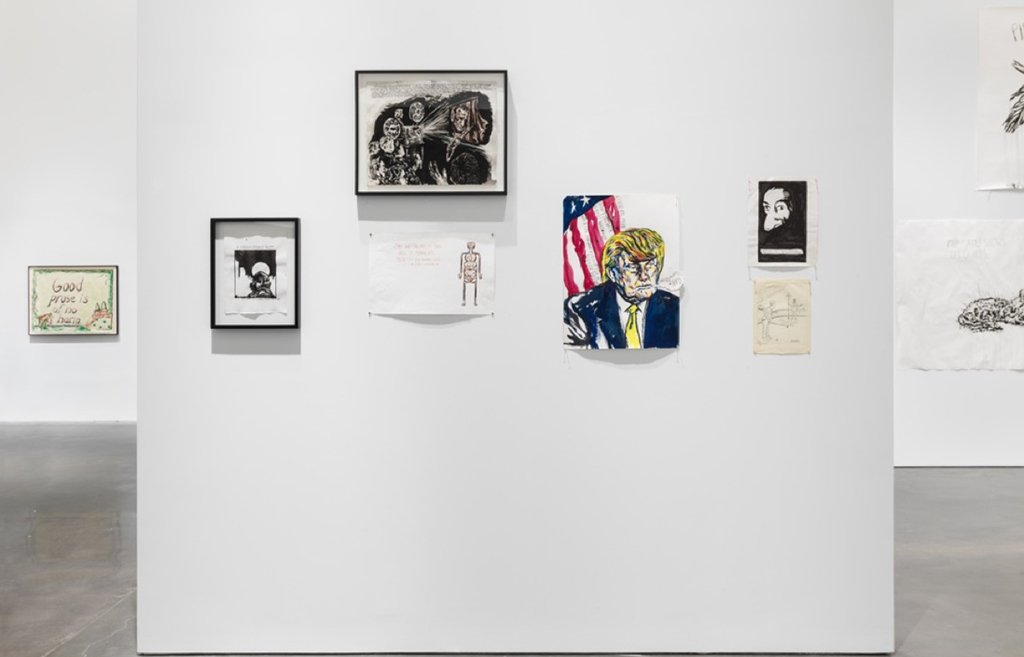 Cult figure, punk icon and irrepressible lampooner, Raymond Pettibon has chronicled the shifting face of US culture for well over thirty years. From politicians to sporting figures, celebrities to counter-cultural heroes, every aspect of American popular culture has come under Pettibon’s trademark pen-and-ink scrutiny. Now, more than 800 drawings are brought together in the largest presentation of the artist’s work to date.

Raymond: Pettibon: A Pen of All Work stretches over three floors of the New Museum, New York, tracing the artist’s career from the 1960s to the present. Different sections explore the role of language and poetry, Pettibon’s reflections on creativity, the impact of subcultures and tribes such as hippies, punks or surfers, and the artist’s caustic observations on politics and current affairs.

Described by the show’s curator Massimiliano Gioni as “semiotic guerrilla warfare, an attack on language and a love letter to language itself,” Pettibon’s work typically combines cartoon-like drawing with handwritten phrases or sentences. Broken at Last, held by Colección SOLO, is one such example, with its characteristic interplay of graphic narrative, visual pun and existential mischief.

It is as a political critic, however, that Pettibon is most widely acclaimed. Holland Cotter, for the New York Times, writes, “his entire output, despite interludes of lyricism and nostalgia, and a running strain of stand-up humor, is a steady indictment of American culture as he has lived it over the past 60 years.” From the countercultural movements of the 1960s to the military and social conflicts of the present day, Pettibon tackles controversy head-on. As the exhibition’s curator summarises, “It is a body of work which, today, in a moment of very conflictual politics, takes on an even stronger sense of urgency.”