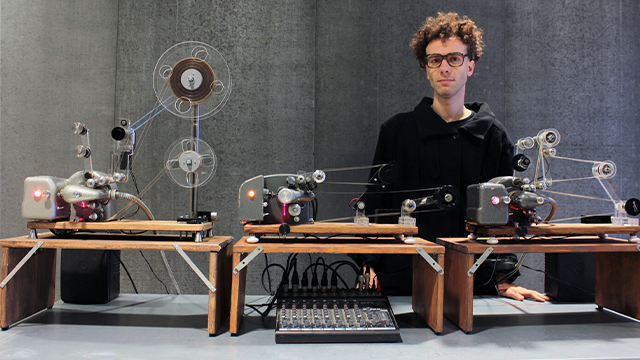 Soundscapes emerge from 35mm film in the creations of Spanish artist, Enrique del Castillo. Working with repurposed parts from vintage projectors, he creates optical readers which transform patterns on celluloid into sound. Part instrument, part automata, these machines are used in installations and performances by the artist, who seeks “to provoke a state of reverie or hipnosis in the listener.”

Del Castillo studied piano and music theory in his home town of Jaen but initially opted to further his education in painting, with a BA in Fine Arts at Granada University. He completed post-graduate studies at Barcelona University and after a period in which he developed parallel projects in both graphic arts and music, finally opted to centre his career on sound.

Circuit bending and synthesisers feature in experimental creations for Las Barbas Indómitas (2006-present) and the artist has also used toy instruments to approach music from the Baroque. He has participated in international festivals including Hunna (Nueva York, 2015), Halle (Alemania), On Off Festival (Berlin, 2015) and the Vilnius International Film Festival (Vilnius, 2014), among others.

Collaboration with the experimental filmmaker, Miguel A. Puertas sparked his interest in celluloid and during a 6-month residency with Fundación Bilbao Arte in 2018, Del Castillo created his first optical sound reader. In 2020 his Phonoptic Reader won the PowSOLO Award for Sound art, organised by Colección SOLO in collaboration with the Dutch sound art network, Powland. A second machine, Umbráfono II, complete with five compositions inspired by polyphonic music from the Renaissance, was featured in The Garden of Earthly Delights through the artworks of Colección SOLO at Matadero Madrid (2021-2022).